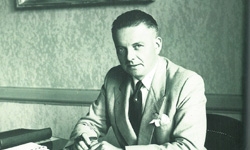 Towards the end of the Second World War, Mr Joseph Morraye, president of the Syndicate of Associated Traders of Ghent, and his son Clément, began to make plans for a trade fair ensuring that Ghent gained an economic head start once the German occupation was a thing of the past. With the support of local traders and industrialists, and of local and national authorities, the first official trade fair in a liberated Europe was organized in 1946.

A pre-eminent mission of the trade fair has always been, and still, is to strengthen the economic fabric of Ghent. Sidmar, Honda and Volvo are companies which decided to set up in Ghent only after having discussed their plans with the International Trade Fair (IJV-IFAS).
Belgium’s first example of social housing was presented at the trade fair as long ago as 1958. In the seventies, IJV-IFAS npo commissioned a study on Ghent in the year 2000, a study which even today confirms the unwavering will of Ghent’s business community always to look ahead. 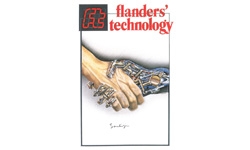 IJV-IFAS has also been a trendsetter in yet another field, notably that embodying a new concept of trade fair activity and organization as such. Indeed, IJV-IFAS was the first to launch the ‘half-day trade fair’; and the idea of building a trade fair around one particular guest-country coincided with the construction of the International Congress Centre (ICC), for which the IJV-IFAS can proudly claim paternity.

Thanks to the successful management and renown of the ICC, the City of Ghent has acquired a widespread reputation as the venue of international congresses. In 1983, IJV-IFAS was entrusted with setting up the first edition of the well-known Flanders Technology fair, which has become an international show case for Flanders. And IJV-IFAS’s president was appointed Commissioner General of the Belgian pavilion ath the World Exhibition in Sevilla in 1992.

As a consequence, the know-how built up in Ghent has been applied internationally over the past few decades. Both in Algeria as in Poland trade fair organizers have resorted to Ghent’s expertise. The international trade fair complex of Tunis has now become a shining example in the Mediterranean Basin, and its spectacular growth was only made possible by the professional input and the logistical support of IJV-IFAS. 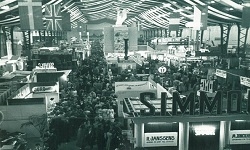 In the world of trade fairs, IJV-IFAS npo has been a remarkable pioneer. Gearing its activities to new social and cultural trends, it has set up a number of innovating fairs for professionals as well as for the general public. In the course of history, future trends were almost always correctly evaluated. Thus a number of successful but also less successful fairs saw the light of day. To name a few: Seniorama, Lentebeurs, Gent Auto Moto, Eurac, Interregio, Europlastica, Agro-Alimenta, Hortechnica, Hout & Wonen, Geld & Beleggen, Kidcare, Lineart…

As a proud member of Febelux.com and UFI*, IJV-IFAS sets the tone not only in Belgium, but also in the European world op trade fairs: Estetika and Jaarbeurs Gent are telling examples.